A Geological Treasure by the Åseli Stream

By Rikke Lunell
Faculty of Professional Studies
University of Nordland

The Alpine landscapesurrounding the Åseli Stream is a beautiful sight. Going into more detailabout the landscape within an area of only 0,1km2 (marked off in red on the map i

n figure 1), we find traces of a glacier which covered the area during the last part of ice age, which was 10.000-10.500 years ago. This ice was a part of the Scandinavian Ice Sheet. In the same area, one can also see interesting and varied bedrock.

Bedrock
The bedrock tells of large-scale geological processes that took place about 430 million years ago. Around that time, Greenland and Norway collided, the bedrock was folded, and a great mountain range, the Caledonian, was formed, shown in figure 2. It was just as long and just as tall, if not taller, than todays Himalayas.

The Caledonian mountains have since eroded, but the bedrock surface that remains today is a window into what once was. At the Åseli Stream, we see in many places the folded mountains in miniature, as illustrated in photo 1. These folded mountains are composed of limestone. They may have been a portion of a coral reef, a shell beach, or chemically precipitated carbonate in the waters between Greenland and Norway. When the lands collided, both the pressure and the temperature at the sea floor increased, and calcareous parts were converted to limestone and marble. Sea clay became shale. This sea clay was originally beposited horisonally in thin layers over the course of millions of years. Following the collision of Greenland and Norway, however, the shale tilted. In photo 2, this can be seen as grooves in the bedrock.The photo also shows a white rock that breaks through the shale. This is solidified magma (melted stone) which has penetrated weak portions of the rock when the earth's crust was in motion, and has formed a dike.

The jagged mountains (the Alpine landscape)we see around Åseli today are, as mentioned, not the same mountains that were formed 430 million years ago. In the beginning of the Tertiary period (66 million years ago), Scandinavia was eroded down to a plain landscape known as the paleosurface. The climate was hot and humid. Due to crustal movements, the landscape gradually rose, especially along the Norwegian coast, and major river valleys formed. During the Tertiary Period, the climate became colder and glaciers grew. It is during the last 2.7 million years that imtermittent ice ages have dominated the northern hemishere. The glaciers lay in the river valleys and continued shaping the landscape as it is today, with the mountains, fjords, and valleys.

The area's land formations
Glaciers dig into the bedrock and deposit sediment. By the Åseli Stream, a glacier has created various (glacial) landforms: striations, roches mountonées, crescentic gouges, and a terminal moraine.

Moraine
A moraine is debris that is carried by a glacier and thendeposited, and consists of particals of a size ranging from clay (<0.002 mm) to the so-called boulder (>25 cm). These rock particals are generally not much rounded, and their deposits are usually unconsolidated (i.e. without clear stratification).

There is a moraine ridge just west of the Åseli Bridge, along the highway 17. It is approximately 30 meters wide and 4-5 meters high. Duw to intrusionsinto it when the road was built, the moraine is not so readily visible, but it is nevertheless revealed by large stones lying on a ridge (photo 3). The moraine is a terminal moraine (deposited at the snout of the glacier)and it was most likely deposited during a brief stop in the retreat of the ice sheet, between 10.000 and 10.500 years ago.

Striations
Striations can be seen in various places at the Åseli Stream. These were formes when rocks frozen to the base of the glacier abraded the bedrock like a giant piece of sandpaper. Striations are thus traces og glacier movements (photo 4), and while they do not indicate the direction of the movement, other landforms can reveal that to us.

Crescentic Gouge
Rubble material frozen into the base of the glacier is pressed forcefully against the bedrock. When the pressure becomes great enough, the rock can crack into splinters along a crescent arc, and a crescentic gouge is formed. The steepest grade of a "sickle" faces the glacial movement (photo 5). Crescentic gouge often occur in grups called swarms.

Roche Moutonnée
Roche moutonnée are formes by glacial freezing and thawing. When the glacier encounters a bump in the bedrock, such as a rocky knoll, the pressure on the stoss side causes some of the ice to melt. Melting water flowson the leeward side of the elevation and penetrates cracks, releasing pressure and causing the water to frezze again, which could result in the cracking of rocks (figure 3), and a steep leeward side will eventually develop.

There are several roche mountonnée in the area. Photo 6 shows a fine example.The steep leeward side is orientes to the northwest and supports reading the crescentic gouges as indicating glacial movement in this direction. It also explains the presence of the terminal moraine by the road.

In search of lost time
The next time you drive along Highway 17 over the Åseli bridge, you shouldstop and think about the glacier that once shaped the landscape here. Although the glacier disappeared about 10.000 years ago, its history iswritten in the rock surface. Once you have learned how to read these signs, they will fascinate you. But you may also find a moment's peace og mind, because beautiful they are. 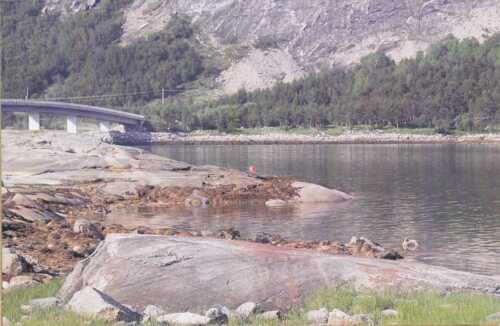 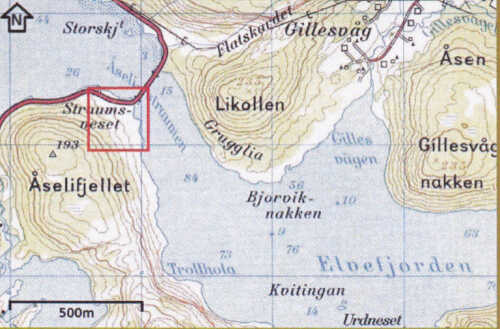 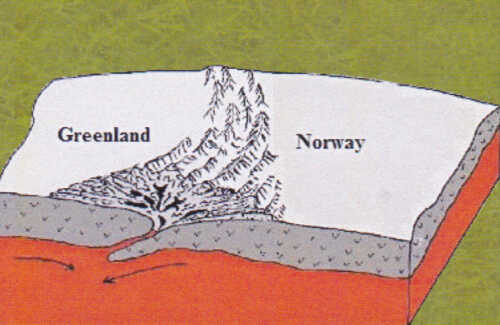 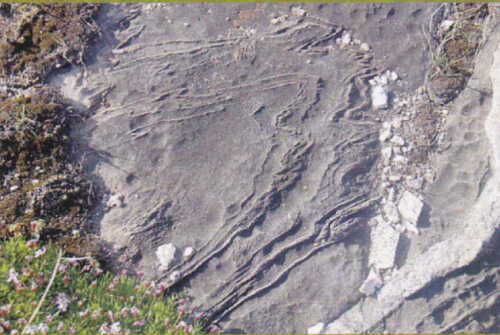 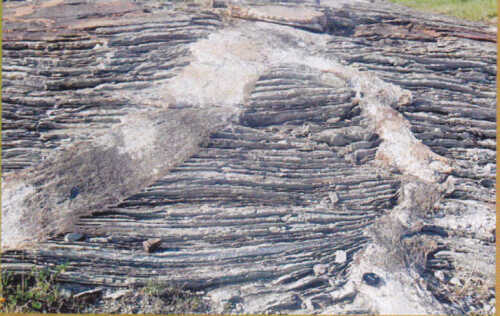 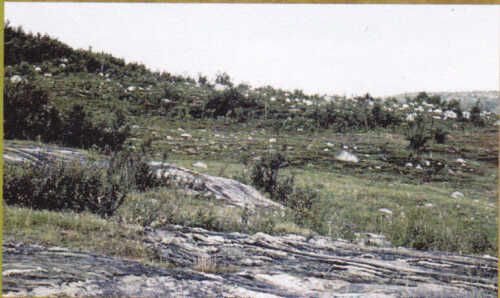 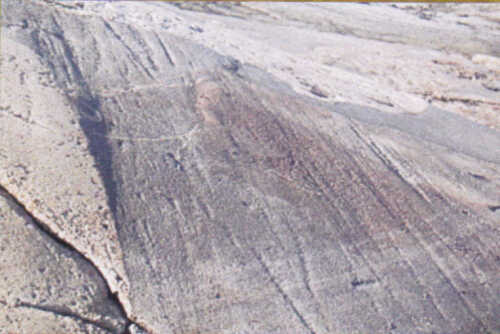 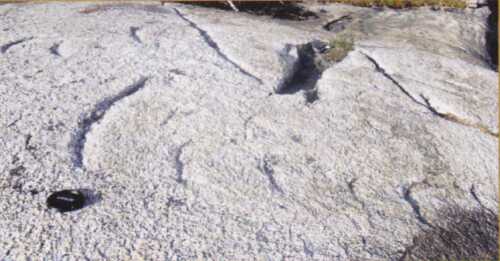 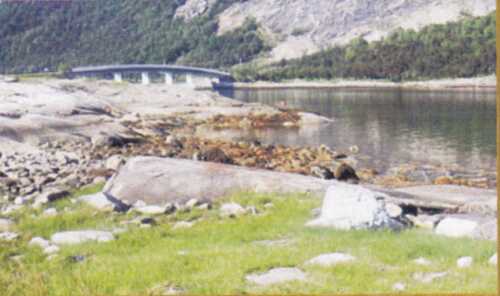