Here you can see a roche moutonèe. It was formed by glacial freezing and thawing. Here the glacier met a bump in the bedrock, such as a rocky knoll, the pressure on the impacted side caused some of the ice to melt. Melted water flew on the leeward side of the elevation and penetrated the cracks. The released pressure caused the water to freeze again, which could result in cracking of the rocks (see figure underneath), and a steep leeward side was eventually developed.

Short summery of the traces from the last ice age in the area.

The moraine, striations, cresentic gouges and roche moutonèe are traces from the last ice age. They show that the ice moved northwest towards the fjord (mark with a red arrow on the map). The moraine, by the road, was deposited in front of the ice during a stop in the retreat of the ice sheet between 10,000 and 10,500 years ago. Then the ice disappeared from the area because the climate became warmer. 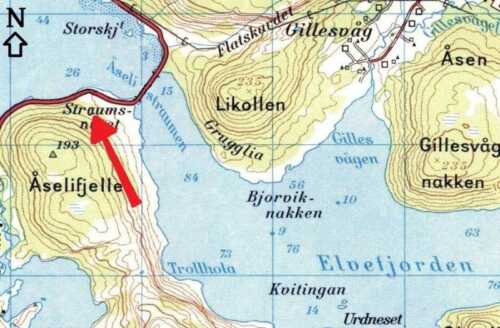